Every month, for you, EPWS presents the characteristics and activities of one member association.

Our member for April is the German Network Caring Economy.

EPWS: If you wanted to describe your association in one sentence, what would you say?
U.K. + M.J.: The Network Caring Economy is an interdisciplinary network of academics and practitioners in the German speaking countries aiming to conceptualise and develop a socially and ecologically sustainable economy with a special focus on women’s experience in paid and unpaid work.

EPWS: What are the objectives of your association?

U.K. + M.J.: The Network’s aims are
– to bring together women who are interested in the characteristics and the development of socially and ecologically sustainable economies;
– to develop concepts of a caring economy;
– to analyse case studies and good practices;
– to foster and disseminate its findings through annual meetings, publications, conferences and workshops and its website www.vorsorgendeswirtschaften.de.

The Network questions the conventional economic theory and practice against the background of the acknowledged fundamental importance of provisioning and care work for a socially and ecologically sustainable economy. The concept Caring Economy takes a gender perspective and puts the characteristics and principles of action of the provisioning and caring realm into the centre of analysis and discussion.
The Network’s annual meetings are used for discussion about current topics and research projects of individual members or groups of members as well as examining case studies and visiting practical projects. Throughout the year members meet in smaller working groups on key issues of concept development. At present, there are two main working groups, one on Neue Gesellschaftsverträge / New Social Contracts and the other on Vorsorge – Sorge – Natur / Provident Care – Care – Nature meeting several times a year.
Information on conferences, research ideas, publications as well as ideas for joint projects is disseminated via mailing list. 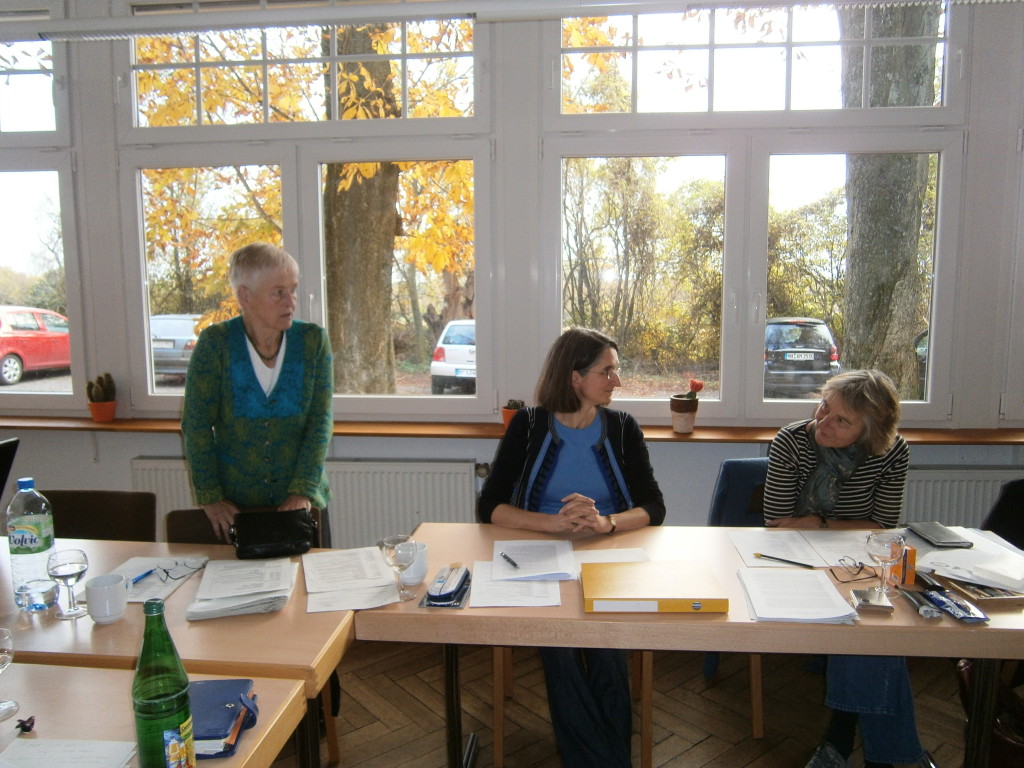 EPWS: What is the history of the Network Caring Economy, in a few words?

U.K. + M.J.: The Network started in 1992 with a rather informal structure as a working group of women economists and ecologists inside and outside academia from Germany, Austria, and Switzerland. Since then it has grown to also incorporate members from other academic disciplines, such as sociology, political and household sciences, landscape and urban planning, and practitioners active and working in different realms of society, such as architecture, horticulture, and art.
Developing the concept Caring Economy is an ongoing process of thought and action. Its methodological approach consists of a combination of standpoint experiences, case studies, and theoretical work. It is based on three main principles of a socially and ecologically sustainable economy which until today define the Network’s analytical framework: (1) Vorsorge / provident care; (2) Kooperation / cooperation; and (3) Orientierung am für das Gute Leben Notwendigen / taking the essentials of a good life as a guideline.

EPWS: Could you explain the organization of your association?

U.K. + M.J.: In 2008 we gave our Network a formal structure and founded the Netzwerk Vorsorgendes Wirtschaften e.V., an officially registered association according to German law, with a general assembly and an elected executive board (president, vice-president, treasurer), to be able to apply for research programmes and other sources of public and private funding. 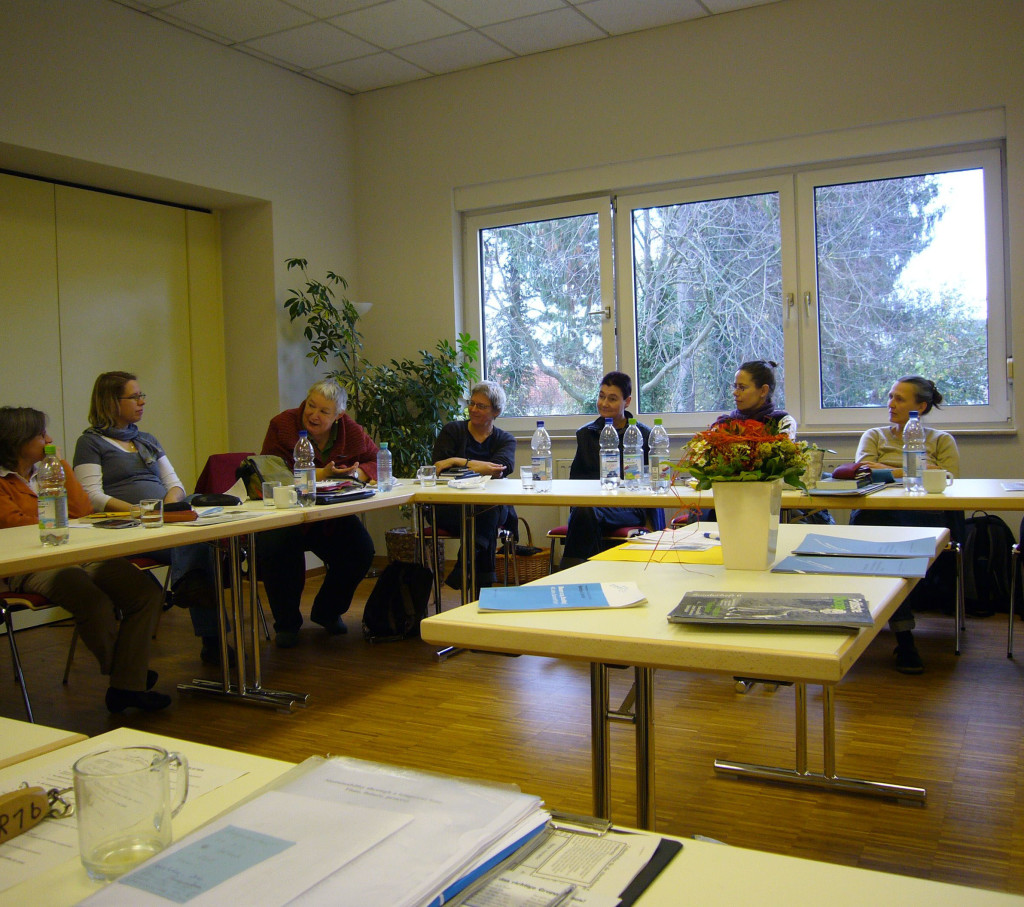 EPWS: What are its recent achievements?

U.K. + M.J.: The following list shows the variety of the Network’s achievements during the last five years:
– Lectures and contributions to conferences, expertise and publications by individual members or groups of members.
– Joint research projects and workshops, such as the further successful establishment of Vorsorgendes Wirtschaften as a conceptual approach of its own as for example documented in the ongoing project Vorsorgendes Wirtschaften – Transformation in Ökonomie und Politik / Caring Economy – Transformation in the Economy and in Politics.
– Networking activities, e.g. the panel “Care – Work – Life” bringing together German networks that aim at the development of theoretical contributions to economic and ecological debates from a gender perspective at the International Association of Feminist Economics IAFFE Conference 2015 in Berlin.
– In 2013 our Network published the volume Wege Vorsorgenden Wirtschaftens / Roads to a Caring Economy. Like the two earlier Network publications, it contains individual as well as jointly written articles by Network members, revealing the plurality of approaches taken ranging from the ethics of caring economy to its different concept of times and futures.

– In 2012 the Network Caring Economy celebrated its 20th anniversary with a special dinner and performance during its annual meeting.

EPWS: What is your agenda for the coming months?

U.K. + M.J.: Our annual meeting will take part in October 2016. In the meantime the two working groups, New Social Contracts and Provident Care – Care – Nature, meet to further clarify the Network’s theoretical position and ideas. Their work may result in joint articles, published on the Network website and/ or papers for internal discussion in the Network. 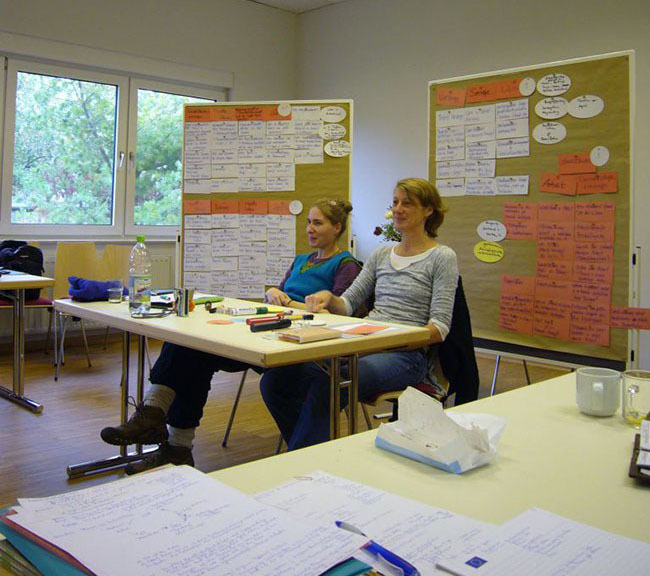 U.K. + M.J.: Having joined EPWS as associate member for the Platform’s first general assembly in April 2007, the Network is a member of the Platform since its very beginning. In November 2015, the association has been elected into the EPWS Board of Administration and Executive Committee with Maren Jochimsen as EPWS Treasurer and Ulrike Knobloch as her deputy.
Collaboration with other EPWS members is mainly taking place on an individual basis rather than among networks since our association still is the only EPWS member network more specifically working on economic and ecological issues.

EPWS: What do you expect from EPWS? In what ways can it help you develop your action?

U.K. + M.J.: We appreciate the information disseminated by e-mail and the EPWS website on EU research programmes and their gender perspective, on calls for partners as well as the international contacts inside and outside our field which we continue to establish at EPWS events. The Platform and its media render visibility to our concept and activities throughout Europe which prepares the ground for future international research collaborations. 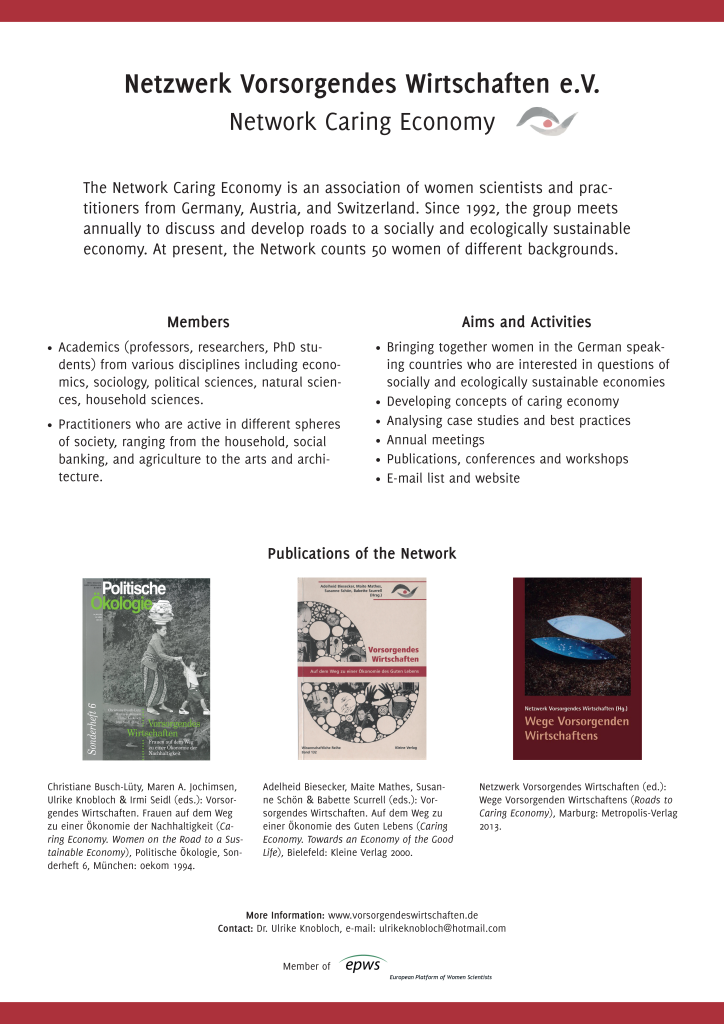 Other associations for economy, ecology and gender: